The 23-year-old has enjoyed a blistering start to the campaign, scoring five goals in three league games to help the Toffees achieve their perfect start, and scored his second hat-trick this season against West Ham in the Carabao Cup on Wednesday.

Speaking on the Kings of the Premier League show, which will return to screens this Friday on Sky Sports Premier League at 8pm, Carragher said: “He’s been outstanding and had a great start.

“Carlo Ancelotti has had some of the best strikers in world football at times. He’s put his faith in Calvert-Lewin and it’s paying off. I’m a big fan.

“The only thing he lacked before was goals. He held the ball up, was good aerially, provided pace, could lead the line, worked off the ball – but he needed to be more clinical in front of goal. That’s what he’s doing now under Ancelotti. 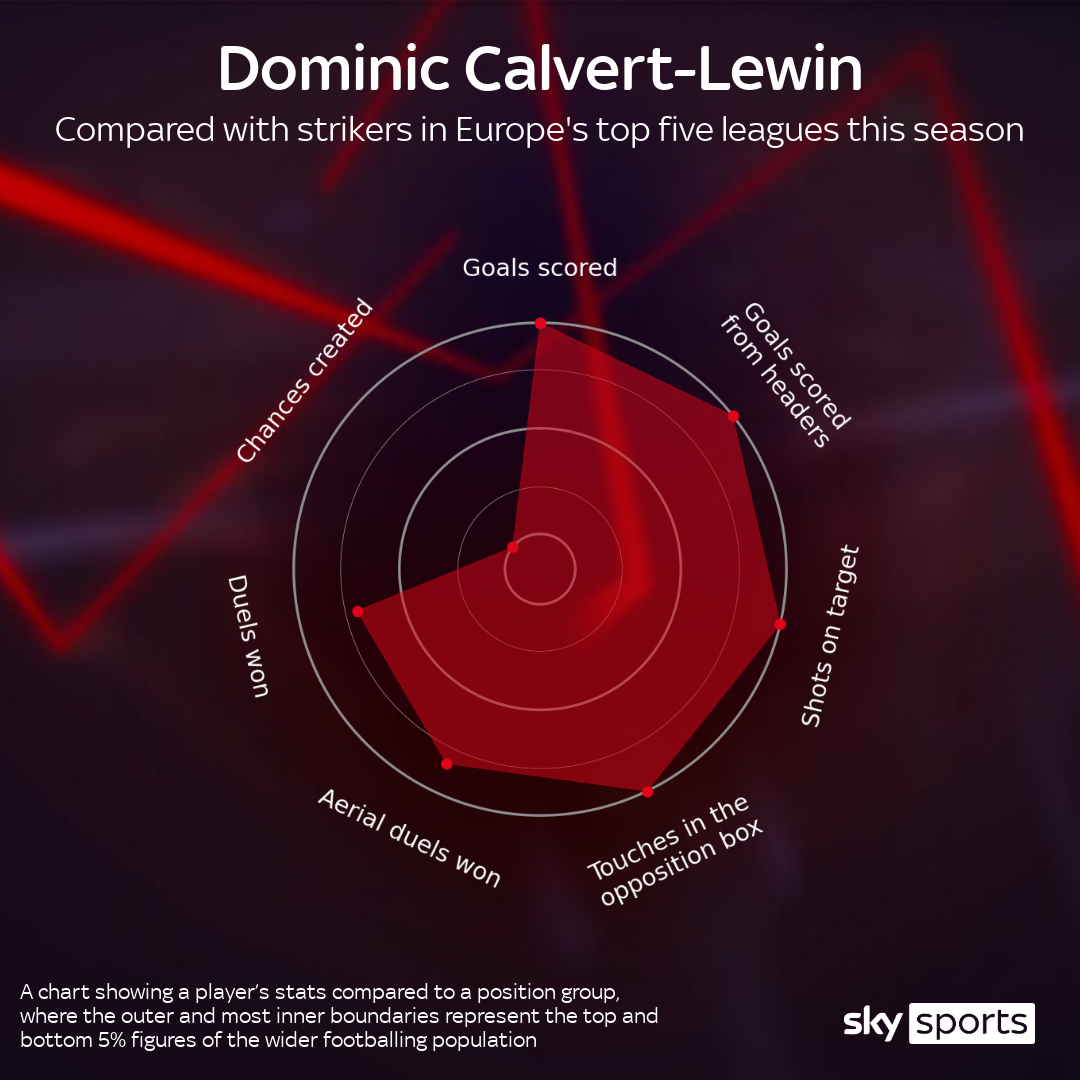 “He’s hitting all the right numbers but it’s very early days. It’s fantastic for him now – but you’ve also got to remember the opposition they’ve played against [including West Brom and Crystal Palace].”

When pressed on whether Calvert-Lewin deserved an inaugural call-up in Gareth Southgate’s squad to face Wales, Belgium and Denmark this month, Carragher replied: “Yes, he’s good enough. He really should be knocking on the door.

“There isn’t much competition with Harry Kane for the actual centre-forward spot. There are a lot of wide forwards, when you think of Marcus Rashford, Raheem Sterling and Jadon Sancho.

“But, in terms of real strikers, now Jamie Vardy has retired from international duty, you look at Danny Ings, maybe Tammy Abraham – they’ve had sniffs with England before, but Calvert-Lewin is as good as those two.

Carragher also poured praise on new Everton signing James Rodriguez, who has already notched a goal and an assist – ranking behind only Mohamed Salah in the Premier League with 10 chances created for team-mates.

“He’s been a revelation at Everton and completely changed the mood with the supporters. I wasn’t sure how it would work out at first. I know he’s played for some big clubs but he’s never really fitted in and become a regular.

“It’s almost like he’s got a relationship with Carlo Ancelotti, more than anything. I think that relationship is one of the reasons why Ancelotti is at Everton, so he can attract this calibre of player.

“It gives everyone in the squad a lift when you come to the training ground and see a player of that quality. They’d see that quality day in and day out, and it lifts standards.

“He’s not the only player that’s come in, Allan and Abdoulaye Doucoure have made a difference as well – that was a big area for Everton to strengthen in the summer.

“But James Rodriguez has just added that bit of class Everton were lacking. He’s there to create for Calvert-Lewin and Richarlison.”

Kings of the Premier League returns on Sky Sports

On the back of its resounding success last season, the debate will return to your screens at 8pm on the last Friday of every month on Sky Sports Premier League.

Sky Sports presenter Adam Smith and two guests will build an ultimate XI from the top-performing players over the past month, pitting stats against gut as they compare data-driven form charts with Kings of the Match fan votes.


Kings Of The Premier League

“This show really is the perfect way to pick the team of the month,” according to Smithy. “It’s never easy picking a dream XI, so let the debate commence.”

The show’s best bits will play out across Sky Sports’ YouTube and the partnership will also deliver the weekly Power Ranking articles every Tuesday on the Sky Sports website and apps.

Sky Sports’ very own Jamie Carragher joins presenter, influencer and Arsenal fan Nicole Holliday for the first show as they lock horns, and occasionally agree, to assemble the ultimate team for September.

The show kicks off on Friday, October 2, with repeats on Saturday and Sunday, and will run throughout the first four months of the Premier League season.

Do the Premier League’s statistical leaders make the cut in this month’s XI, or do the fans’ favourites earn starting berths? Tune into Sky Sports Premier League at 8pm on Friday to find out…