Rapid-response COVID-19 tests, which give results within an hour, and new approaches to crowd control may be key to bringing 10,000 fans back into football grounds and sports stadiums in January.

The government this week gave the green light for test events in elite sport, which will see 2,000 to 4,000 fans returning to stadiums from December 2, in areas of low coronavirus infection rates.

However, Sportsmail understands plans have drawn up for pilot events involving much larger crowds in the new year, as long as the infection rates stay low.

The Department for Culture Media and Sport has already considered the next phase in the process, which would see pilot events of up to 10,000 fans that make use of new technology or approaches.

DCMS has set up a Sports Technology and Innovation Working Group, known as STIG, which is expected to play a critical role in the return of more fans.

A decision on bigger pilot events rests with the Cabinet Office and Boris Johnson, but there is believed to be determination within DCMS to keep pushing this agenda.

‘A pilot event would allow you to test something that is not happening currently, like a new protocol or piece of technology,’ a source close to the discussions told Sportsmail.

‘What we have now is a baby step and it has to be delivered really well. The next step is can we get pilot events with more people? We are looking at rapid response testing and clinical passports as the route to getting fans back in.’ 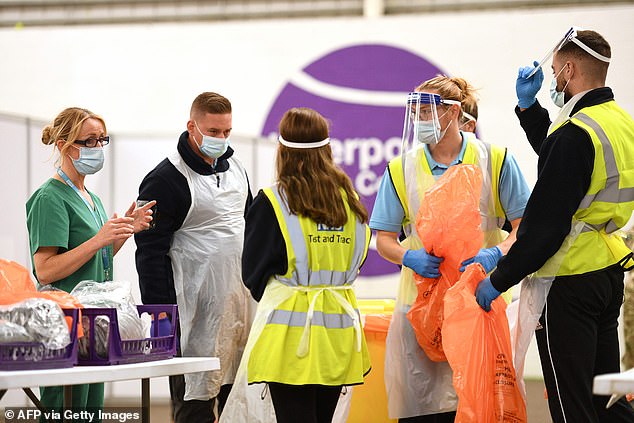 Rapid testing has proved successful in Liverpool, where 153,000 were completed in two weeks

DCMS’ efforts have been appreciated within football and other sports after months of frustration during which it was felt double standards were applied, with entertainment venues allowed to open, but sports stadiums forced to remain closed.

The go-ahead for the return of fans in tier one and two areas from the end of national lockdown, took sports leaders by surprise.

The next step, pilot events, would be held at a limited number of venues, potentially across different sports and they would be assessed on a ground-by-ground basis.

It is likely those chosen would allow a higher level of crowd control due to the nature of the stadiums, where there are multiple entry and exit points and wide concourses, both inside and outside. 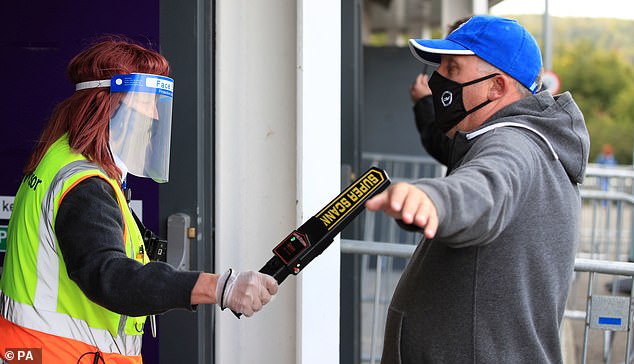 Some grounds, such as Fulham’s Craven Cottage, pose particular challenges since with one stand under construction there are limited entry and exit points. The club has discussed with its fans limiting capacity to just 1,500 in the short term, at least.

Brighton’s modern, Amex stadium, may be a potential candidate and the club’s progressive approach to tackling the return of fans through a test event against Chelsea in August, puts it in a strong position.

‘Within a month, things could change again quite rapidly,’ said Paul Barber, the club’s chief executive, who has been clear the Seagulls will lose money with only 2,000 or 4,000 fans. 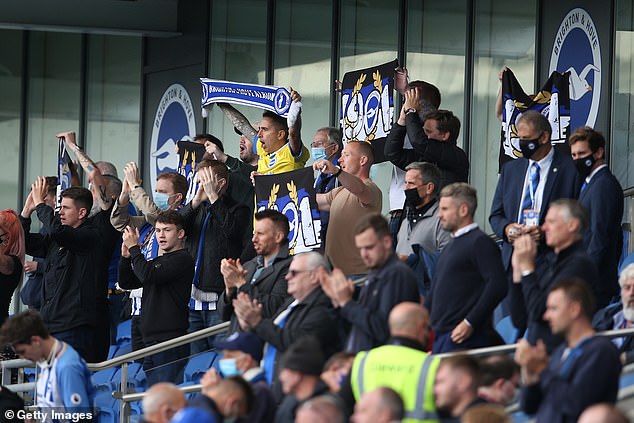 The first step in returning fans will allow 2,000 or 4,000 supporters in tiers one and two

‘We are committed where it’s possible to rapid testing, which the Premier League, being part of the STIG group, have been exploring.

‘We are very committed to working openly with government to show them, as we did here for the test event, everything we’re doing, how we’re doing it, what the results are.’

‘We are very, very open to sharing all of the information we’ve got, if that helps us to accelerate bringing larger crowds back sooner because that’s the only way the football industry can start to look at genuine viability again.’

Clubs are desperate for ministers to explain clearly what steps they must follow in order to work towards the ultimate goal, which is full capacity. 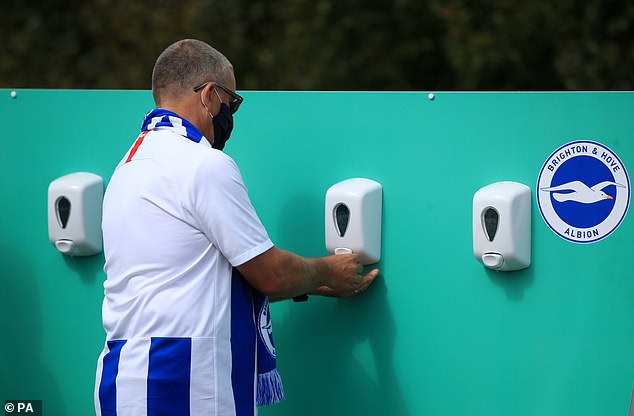 At 2,000 or 4,000 fans, clubs in the top tier or larger grounds throughout the EFL come nowhere near breaking even. Most Premier League clubs need around 10,000 supporters to start making money.

Meanwhile, rapid testing has been trialed in Liverpool, where 153,000 people were tested in the first two weeks of the scheme with results provided in under an hour.

The method has proved successful in identifying people with coronavirus. 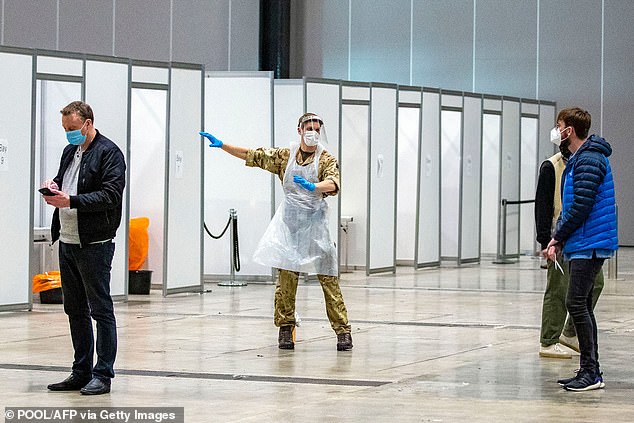 In Liverpool, the army assisted with the mass testing programme at 37 venues across the city

‘IT’S A BIT OF A SHOCK!’ CLUBS SCRAMBLE TO LET FANS BACK IN

Football clubs in areas where covid-infection rates are low are scrambling to be ready to let fans in to their grounds from Wednesday December 2.

The government’s announcement on Tuesday that those areas deemed to be in tier one or two under the new regional tier system can allow elite sporting events with supporters from Wednesday, took many completely by surprise.

Tier one areas will be able to hold elite sports events with up to 4,000 fans from the end of national lockdown on December 2. 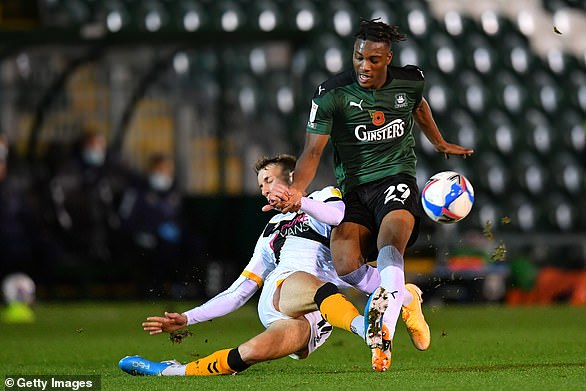 Tier two areas can accommodate up to 2,000 supporters at sports events, while venues in tier three can still not admit people to stadiums.

Prime Minister Boris Johnson is due to reveal which areas are in which tier on Thursday.

However, League One Plymouth Argyle hope their area is classed as tier one, since covid-infection rates have remained relatively low in the West Country.

‘It took us a bit by surprise,’ admitted Andrew Parkinson, the chief executive of the Pilgrims. 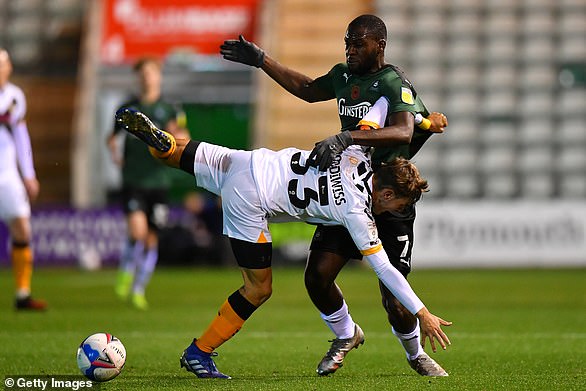 ‘I don’t think people thought it would happen this side of Christmas. It’s welcome news on the whole.’

But it also brings a challenge, as Plymouth went straight into meetings with the local Safety Advisory Group to finalise arrangements for the return of fans, and the test events will be expensive.

‘It’s about the fans. They have been brilliant in supporting the club and it is something back for them.’

Plymouth are considering limiting their first event, either a rearranged home game against Rochdale on Wednesday December 2 or against Ipswich Town on Saturday December 5 to just 1,000 supporters, regardless of which tier they are in, in order to test their system. 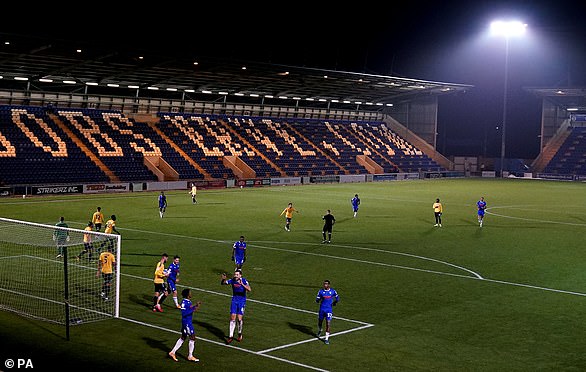 And even if they are allowed 4,000 fans, matches in the 18,000-capacity Home Park stadium will be costly.

‘We have a big ground,’ said Parkinson. We have to open all entry and exit points and staffing will be in line with what we would have normally. It will be run at a loss.’

Meanwhile, across the country in Essex, League Two Colchester United are also hoping their area will be classed as tier one. A gate of 4,000 would just about match their average attendance.

‘It’s a bit of a shock,’ said chairman Robbie Cowling. ‘And then there is the realisation there is a lot to do.’ 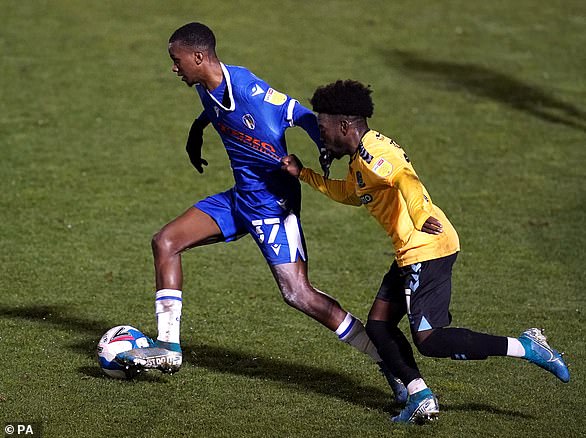 The club is taking a cautious approach initially limiting the number of fans to 1,500

Colchester are also erring on the side of caution. For their first game against Grimsby Town on Saturday December 5, the club is considering limiting attendance to 1,500.

‘We want anyone who comes to feel safe and secure so they keep coming,’ said Cowling.

While 2,000 fans would broadly turn a profit at the Jobserve Community Stadium, Cowling has his eye on the bigger picture.

‘That is not the whole point. We are worried that if we don’t have fans back for too long, they will find other things to do.’