By Mike Dickson for the Daily Mail

The world’s top tennis players face the threat of swingeing fines and even being deported from Australia if they breach Covid protocols.

All Australian Open players have now been sent a six-page letter from organisers, seen by Sportsmail, assuring them that they will imminently receive their charter flight details for next week.

But it also makes clear the severity of the clampdown on those who break rules after arriving, which include only being out of their hotel rooms for five hours’ practice per day during the initial fortnight’s quarantine.

They will be issued with a 14-day ‘Detention Notice’ on arrival and any breach by a support staff member will be considered a breach by the player employing them.

The listed sanctions include a fine of up to £11,500, deportation, arrest, ‘isolation in a government-mandated hotel room’ and forfeiture of prize money.

With Melbourne having endured a four-month lockdown last year, local authorities are desperate not to lose their hard-won gains in suppressing Covid, although there continue to be outbreaks.

It has been confirmed, via tournament player liaison director Andre Sa, that the regulations proved a disincentive for Roger Federer to travel. The Swiss maestro is said to be seriously unamused at this entering the public domain.

The player letter from Tennis Australia chief executive Craig Tiley illustrates the enormous lengths to which his organisation is going to get next month’s Australian Open and its lead-up events on.

It reveals that there will be at least 18 charter flights from seven different locations around the world to transport a total of 1,270 people to Melbourne. 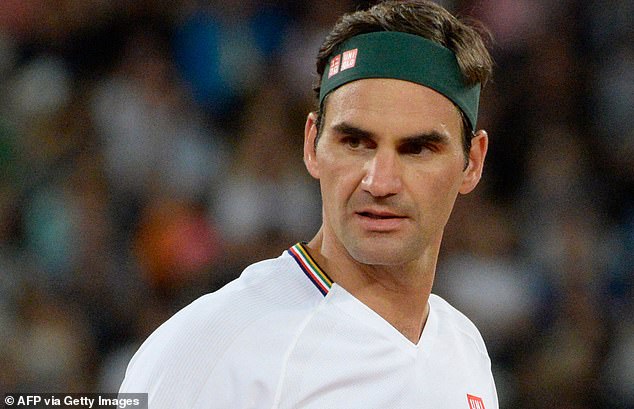 It has been confirmed, via tournament player liaison director Andre Sa, that the regulations proved a disincentive for Roger Federer (above) to travel

In addition to the previously established departure points of Dubai, Los Angeles and Singapore there will be planes going from Abu Dhabi, Doha, Miami and Antalya in Turkey. These will arrive into the private section of Melbourne’s Tullamarine airport.

Players have been told they must have a negative test no more than 72 hours before departure to board the planes, which will carry only around 75 passengers each.

The guidelines also warn players that their allocated hotel rooms will not have balconies and that ‘you will not be able to cook or prepare meals while in quarantine’. However, alcohol can be ordered as part of room service.

In an interview with America’s Tennis Channel, Tiley described the preparations for the mass airlift next week.

‘It’s been crazy, we’ve never experienced anything like it,’ he said. ‘Logistically to pull something like this off is a small miracle but we are giving it a go.’

The Australian Open qualifying event begins in unprecedented fashion on Sunday, with the men in Doha and the women in Dubai. Those who come through will join the main draw players on the flights southwards.