Rio Ferdinand says Manchester United’s fringe players blew their chance to nail down a first-team starting spot in narrow Watford win as Jesse Lingard, Donny van de Beek and Co fail to stand out in tepid display against the Hornets

By Kathryn Batte For Mailonline

Manchester United’s fringe players failed to make the most of their opportunity to impress Ole Gunnar Solskjaer, according to Rio Ferdinand.

However, neither were able to stamp their authority on the game with the match fizzling out after Scott McTominay’s goal in the fifth minute. Ferdinand was doubtful that any of the players hoping to force their way into Solskjaer’s first-team did enough to stake a claim for a regular starting spot. ‘Ole will be happy to be in the next round most importantly,’ the former United defender said on BT Sport after the game.

‘This game was about opportunities for the fringe players. He’s not a fringe player but McTominay was probably the only player who performed to the standard you expect or exceeded that.

‘Maybe a missed opportunity for those trying to force their way into the manager’s plans on a more regular basis. But the most important thing was to get into the next round.’ 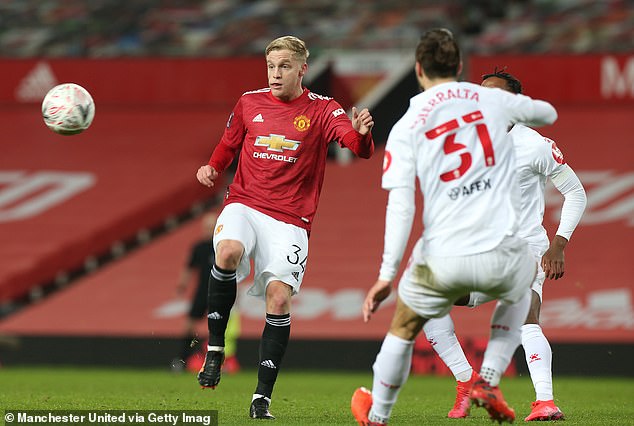 Van de Beek has had to be patient since his £40million arrival from Ajax last summer. The midfielder has started just two Premier League games and a further seven in other competitions.

Lingard was making only his third appearance of the season, with his other two games coming in the Carabao Cup. The 28-year-old has only made United’s Premier League squad on four occasions.

Daniel James and Mason Greenwood also started both but forwards were substituted for Marcus Rashford and Anthony Martial in the second half.

Bruno Fernandes was not needed with the club’s top scorer getting a much needed rest after playing nearly every minute in the Premier League this season.

Solskjaer also looked to give Harry Maguire a rest but the United skipper was called upon just before half-time with Eric Bailly forced off with an injury. 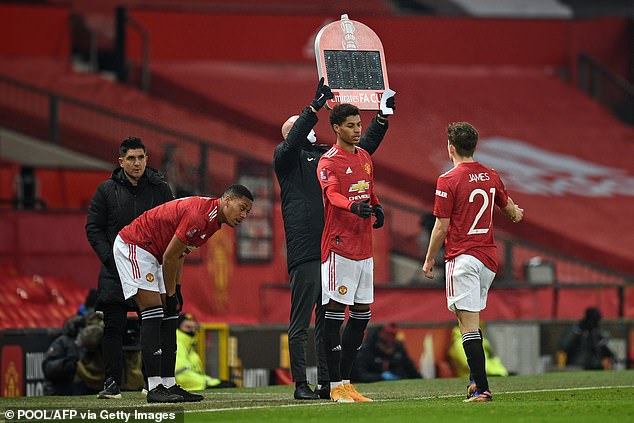