Portugal U21 2-0 England U21: Aidy Boothroyd’s side on the brink of ANOTHER early Euros exit as Young Lions fail to register a single shot on target

By Jack Gaughan for the Daily Mail

One shot on target in 180 minutes. No shots on target from open play in 180 minutes. Pointless England remarkably can still qualify from this group but even in the highly unlikely event they do, this has been such a chastening week.

A week that brings into sharp focus the country’s frailties and issues at this level, the apparent finishing school for Gareth Southgate’s seniors. The sort of week that leaves technical directors reaching for drawing boards.

Aidy Boothroyd’s contract expires this summer and his detractors become louder with each insipid display. Two defeats in opening European Under-21 Championship matches would always prompt severe criticism but it is the manner of them that really ought to concern the FA. Nobody can dispute that. 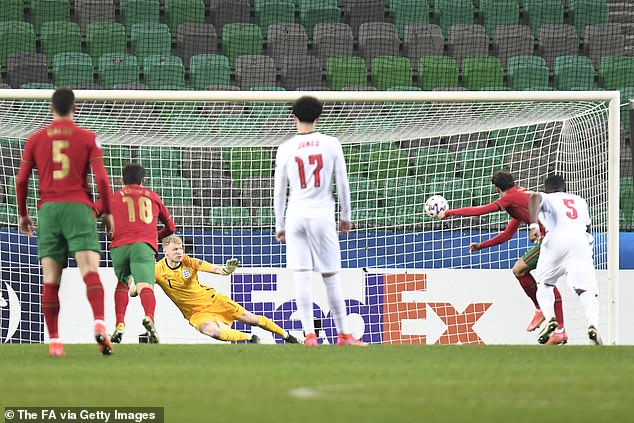 England have resembled a team without a clue. They don’t create anything. They don’t have a go. They look like squad of strangers, which jars with the pre-tournament chat of how the pathway, and previous experiences together in other age groups, should make sure that dismay of two years ago will not be repeated. It is now three victories in the country’s last 18 games at this stage, going back to 2009.

‘We need to review our record,’ Boothroyd said. ‘It’s a time to talk through what’s happened. We were only favourites in the English press. We’re not making excuses.

‘We didn’t create anywhere near enough, anywhere near as much as we used to. Considering the amount of goals we scored leading up to this, that was a real strength of this group. To not have a real threat is not only disappointing but something we need to rectify.’

The really worrying aspect of Sunday night against – it must be said – a very technically sound Portugal, was the lack of urgency.

Difference between defeat and a draw was negligible for their qualification hopes. Either result dictated that Croatia had to be dealt with in Wednesday’s final game, while simultaneously praying Portugal do them a favour against Switzerland.

With that in mind, England’s absence of dare was startling, as if the concept of risk and reward did not exist. One set piece, almost midway through the opposition half, saw just three England players start ahead of the ball and it ended up back with goalkeeper Aaron Ramsdale seconds later. 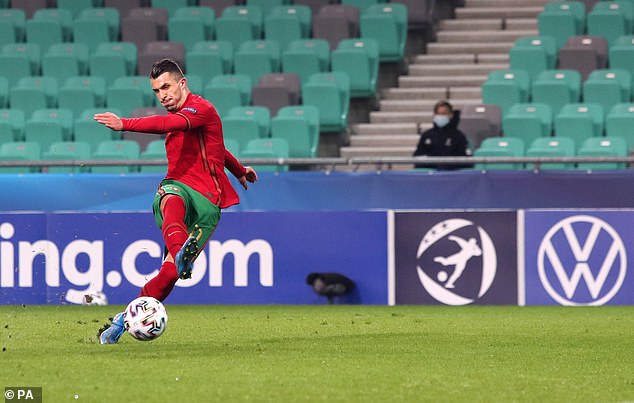 Boothroyd maintained that England intended to ‘take the game to them,’ before quickly adding: ‘We wanted to still be in it at half-time.’

There is no shame in losing to Portugal but if you are to, then do so trying. It raises questions about tactical guile and how to manage these matches. Again, everybody waited for somebody else to produce magic. Surely that is not the gameplan.

England need to beat Croatia by two clear goals to have any chance of making the quarter-finals. Them scoring twice would be just as surprising as progression to the summer knockout rounds.

There is mitigation in missing someone like Jude Bellingham, who would offer more drive in central areas, and the injury to Mason Greenwood, yet watching this set-up – just the atmosphere surrounding the team’s performances – you wonder whether anyone could positively affect their fortunes. 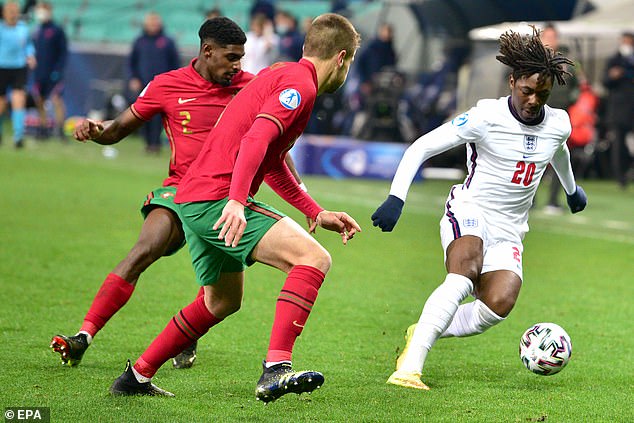 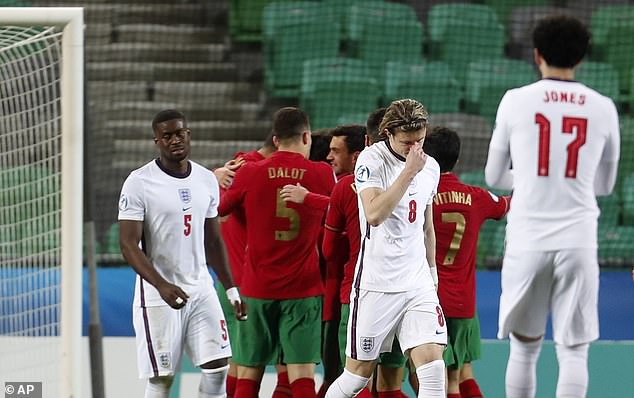 Eberechi Eze’s introduction at half-time gave England more impetus. Finally someone willing to glide past markers, to drive into space without fear. He could not take on an astute Portugal alone though. Eddie Nketiah was isolated, the tricky Noni Madueke marshalled by Diogo Dalot.

Portugal just looked slicker. They had plenty of chances before taking this away from England, who had given silly balls away in their own third too often. Oliver Skipp had no support in midfield, robbed by several Portuguese converging on him, and the ball was in the net soon after. Dany Mota passed across Ramsdale following a rapid break full of purpose 19 minutes after the break.

The game was done with 16 minutes remaining. Marc Guehi fouled off the ball, standing on Goncalo Ramos’ foot inside the box. Barcelona’s Francisco Trincao smashed in the penalty.