THE SECOND THE basketball slips into Lonzo Ball’s hands, he’s got one target in mind.

It’s March 1 and the New Orleans Pelicans are down by six to the Utah Jazz early in the third quarter. After a Mike Conley 3, Pelicans wing Brandon Ingram takes the inbounds pass and shovels it on to Ball, who immediately swivels — and scans. Ball immediately spots a 6-foot-7, 284-pound 20-year-old streaking down the sideline, outrunning three Jazz defenders who see the play coming but can do nothing to stop it.

With one flick of the wrist, Ball sets everything in motion from the opposing free throw line, launching a 65-foot dart toward his bullseye. From the left side of the lane, Zion Williamson leaps toward the rim, catches the nearly floor-length pass and softly lays it in.

The play is months in the making. Years, really. Building up that chemistry takes time. It started the moment Williamson and Ball first played in a pickup game at the Pelicans’ practice facility in 2019. In the years following, the duo has emerged as one of the most devastating and explosive in basketball.

“Literally, the moment he caught it,” Williamson said, “I knew he was throwing it. When he released that pass, I knew it was on the money.”

From start to finish, the best alley-oops barely last a second. But basketball’s most exciting play is far more intricate than simply a lob and dunk. It requires trust between teammates, built over years — involving nonverbal tics, intentionally terrible passes, audacious finishes.

It requires time, strategy and, from time to time, even chants for tropical fruit.

FOR SOME PLAYERS, it’s a look. For others, it’s a nod. Others, a subtle point. Every great alley-oop starts with a conundrum: How does one player let his teammate know he’s about to go flying through the air to the rim without making it obvious to the defense?

For Philadelphia 76ers center Dwight Howard, the recipient of 984 alley-oops in his career, it’s a word.

Monday through Friday, host Pablo Torre brings you an inside look at the most interesting stories at ESPN, as told by the top reporters and insiders on the planet. Listen

Yes. Pineapple. For most of Howard’s career, he relied on a series of nonverbal looks — developed over time with his Orlando Magic teammates Hedo Turkoglu and Jameer Nelson — that led to him to sprint and launch toward the basket. But playing on his sixth team in nine seasons provides no such time to develop the nonverbals. So he resorts to fruit.

“Pineapple! Pineapple!” he said. “Something crazy to throw the defense off.”

For Hall of Famer Shaquille O’Neal, it was dessert: ice cream.

“‘Ice cream’ would be if you’re a guard and you’re in front of me — then I say, ‘Ice cream.’ That means when you get close to the backboard, throw it anywhere,” O’Neal said.

Not everyone is so sneaky. Teammates used to tease Jazz center Rudy Gobert because he would egregiously point in the air, believing he was open for the lob.

“You feel like you have the opportunity to catch the alley-oop, you get excited,” Gobert said. “So you point up.”

Utah guard Donovan Mitchell, who has thrown 65 lobs to Gobert over the past four years, helped put an end to all that excessive pointing. Through practice and film sessions, he has developed a feel for when Gobert should and will launch his 7-foot-1 frame at the basket. Now, Gobert can keep his fingers from giving up the ruse and count on Mitchell delivering.

There are few better at this hidden art of spotting a good lob opening than Los Angeles Lakers star LeBron James, who, per Second Spectrum data, trails only Draymond Green in efficiency on alley-oop assist opportunities.

“As a passer, I’m always looking at the second line of defense in a half-court situation,” James said. “There’s always a bottom guy or someone that’s ready to try and help on the lob. I want to put my offensive player in a position where all he has to do is go up and go get it.”

If anyone has as much institutional knowledge on the alley-oop as James, it would be his longtime friend and Phoenix Suns guard Chris Paul, who has thrown the second-most alley-oops in NBA history since the league began tracking the stat in 1996. Get Paul started and he can give a full-on lecture on the delicate intricacies of a perfect alley-oop setup.

“The screen, the right angle, you got shooters on the wing,” Paul said. “It’s all about setting angles off the screen and reading the low man … “

“To tell you the truth, I’m probably making it sound easier than it actually is.”

NO ONE HAS assisted on more alley-oops in the NBA over the past five seasons than James Harden, whose 475 lob assists are more than double that of second-place Trae Young (235) and third-place Russell Westbrook (233).

Part of what has made Harden’s lob so unstoppable is it looks just like his floater, something he perfected with his former teammate Clint Capela and is working on with new Brooklyn Nets vertical threats DeAndre Jordan and Nicolas Claxton. 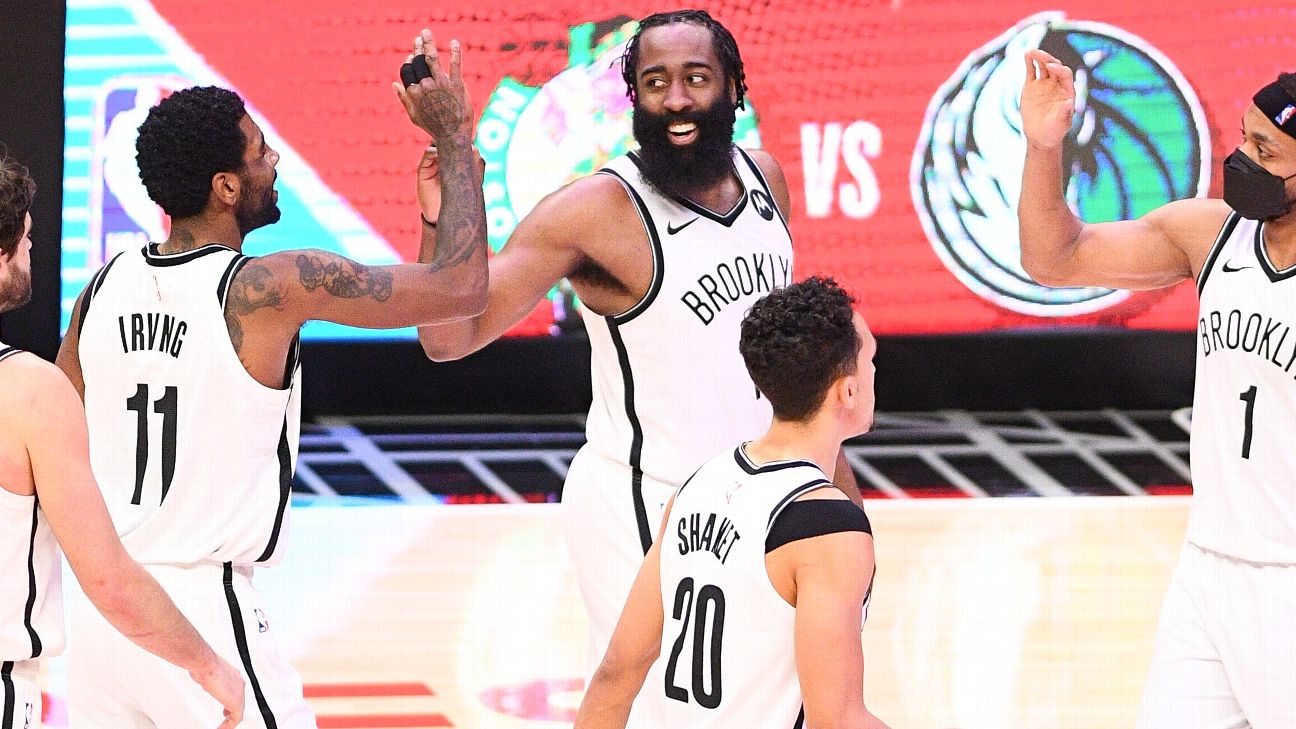 “Being a 3-point threat and able to get to the basket and draw attention, I learned how to just place the ball and communicate with my teammates,” Harden said. “When I drive, this is what you need to be ready for.”

For Gobert, a two-time Defensive Player of the Year, Harden’s ability to deliver that pass on the drive makes him nearly unstoppable.

“When you know that a guy is not a great passer or he’s unable to find good angles, it’s way easier to guard,” Gobert said. “[Harden] was able to, as soon as I was over helping, throw the lob over the top. Clint was always at the right spot.”

Minnesota Timberwolves guard Ricky Rubio, for his part, said he keeps track of which teammates like to jump off one leg or two, left side or right side, high or low lobs, clean finishes or acrobatics. Howard, though, likes to keep it simple, making the target as clear as possible for his lob throwers.

“I tell them to hit Jerry West or the flag and I’ll go get it,” he said, referring to the stickers placed on the bottom corners of every NBA backboard.

But some situations don’t allow for a perfect setup. When Harden drives, he’s scanning for long defenders in a position to jump up and disrupt his dimes. Those obstacles can derail what would be otherwise perfect deliveries — though James argued that’s not necessarily a bad thing.

“The worst passes are some of the best alley-oop finishes,” he said. “It challenges the guy who is receiving it to actually contort his body or jump a little higher than he wanted to, stretch out his wingspan and actually come down with it and be able to finish either with the left hand or the right hand.”

Lonzo Ball aims for the same spots Howard loves, though pinpoint delivery is not always his goal.

“If I see it in the game, I just throw it and hope for the best, honestly,” Ball said.

Hoping for the best might be something that runs in the family. According to brother LaMelo, he doesn’t aim at all.

IT’S FEB. 21 AND the Atlanta Hawks have a comfortable fourth-quarter lead on the Denver Nuggets. Trae Young casually dribbles up the floor, crossing the ball over to his left hand as he passes the half-court line. He walks the ball toward the left sideline, with Nuggets star Jamal Murray tracking his every move.

Young is searching — waiting — for his favorite target, John Collins, to make his move. He’s been doing so since he first paired up with Collins some three years ago at the 2018 Utah Summer League. By the time the duo got to the Vegas Summer League a few weeks later, Young knew their connection was stone cold.

Get access to exclusive original series, premium articles from our NBA insiders, the full 30 for 30 library and more. Sign up now to unlock everything ESPN+ has to offer.

Collins, a springy 6-9 forward with a penchant for finishing any lob thrown in his orbit, is also scanning back for Young. They make eye contact and share a knowing nod. Collins fakes toward the perimeter, then cuts backdoor. He’s wide open.

Young coolly flips a lob to the front of the rim. Collins takes three steps and launches, catching the ball and then slamming it home, adding a pirouette off the hoop for good measure.

“I just made it up in my mind I was not coming down with the basketball and going back up,” Collins said. “I was finishing that one.”

For everything that goes into getting a basketball from one ground-bound player to another soaring his way to the hoop, the finish is the most important part of the process.

For Mike Conley, having someone to throw an alley-oop to was a new experience.

“It was getting used to the idea of throwing a lob to any big, because God bless Marc Gasol, but he’s not jumping above the rim for many lobs.” Conley said. “Now, my reads have changed from the floater to an alley-oop for Rudy [Gobert] and learning where his catch radius is.”

The appeal of the alley-oop goes way beyond its efficiency. Sure, there are few better ways to score than teeing up a teammate to drop the ball directly into the basket. But there’s a compounding effect too.

“It’s a little demoralizing,” Gobert said. “You end up getting dunked on, and at the same time it gives them energy to see it.”

That’s why these plays are so memorable for the duo executing them. Collins can’t help but remember an NCAA tournament game from four years ago against Kansas State when he broke a zone set up to keep him out of the post.

“The defender jumped early and I stayed on the opposite block and my point guard lobbed it over to me,” Collins said. “And as the defender saw that he was cheating and tried to jump back, he got bodied.

“I dunked all over him. That was cool.”

When asked to recount his favorite alley-oop ever, Williamson pauses. He needs some time to think.

“That’s tough,” he said. He pauses again, rifling through a catalog years long.

Then it hits him.

“It was Sweet 16 in college,” he said. “It was against my current teammate, Nickeil Alexander-Walker. Tre Jones is the point guard. He got the steal.”

He continues, getting more animated by each passing detail.

“I was running on the right wing. It’s a close game, NCAA tournament play, so it’s very intense. I remember Tre just kind of saw me.

“He just threw it up. He put it up there. I had to go get it off one foot. I remember I caught it, the arena just went crazy. In my mind, I’m running back on defense thinking, ‘Man, this is NCAA basketball. This is March Madness.’ It was crazy.”

The anticipation for those otherworldly jams could not have been higher coming into Williamson’s rookie year. When he arrived at those first pickup games with Ball, Zion already had a plan.

“My thing was like, ‘All right, before I say anything, let me see if he’s gonna throw these lobs or if I post up full court if he’ll throw it,'” he said.

“I was doing that, and every time he does that thing where he flicks it up the court, and he’d do it every time.”

That’s how one of the NBA’s best new alley-oop duos was born — and even a preseason meniscus tear couldn’t slow them down.

That was all Ball needed to hear.

“Once you have trust with someone you know is gonna catch it,” Lonzo Ball said, “you can pretty much throw it wherever.”