Thomas Tuchel joked in-form Chelsea star Christian Pulisic only has himself to blame for inviting comparisons with Eden Hazard after his decision to inherit Chelsea’s No.10 shirt.

The USA international has endured a difficult season and struggled to maintain his fitness, but he has arrived at the decisive stage of the campaign in peak condition.

Pulisic has scored four goals in his last eight appearances, mirroring the form he displayed during last season’s run-in, prior to sustaining a serious hamstring injury in the FA Cup final against Arsenal.

The 22-year-old was on target again in midweek, registering the vital away goal in Chelsea’s 1-1 Champions League semi-final first leg draw against Real Madrid.

Given his stature, dribbling ability and the positions he takes up on the pitch, comparisons with Hazard, who seven eight years lighting up Stamford Bridge, represents a pressure Pulisic will constantly have to live with, but his manager is confident that is no bad thing. 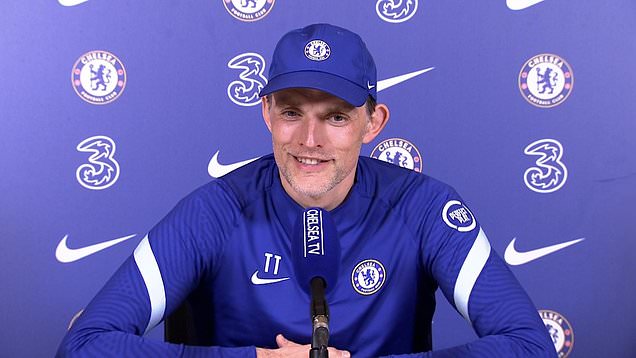 ‘Well he took his number so now he has to live with it!,’ said Tuchel ahead of Saturday’s game against Fulham.

‘So he has a bit of an influence on the comparisons but if people do this maybe they think about it in the best way, no.

‘I’m happy that he arrives in the decisive moment of the season in top shape, he has good confidence and this is the key point for him, that he feels confident in his body, calm in his mind and he feels free on the pitch.

‘And when he feels like this he can be a decisive guy for us, and this is what he proves in the moment.

‘He gives us a big physicality and we have to see how we put him on the pitch tomorrow if he starts or whether he is on the bench but we are very happy that he is decisive, he steps up and plays full of confidence. It is good for us.’