Well, Russia for a start. Finland too, probably. But everybody else? Who would begrudge the Danes qualification after what they’ve been through?

This was the ‘magical night’ their coach Kasper Hjulmand had called for. The night Denmark had hoped for. The happy ending after the harrowing experience of seeing Eriksen brought back to life on the same Parken Stadium pitch 10 days earlier. 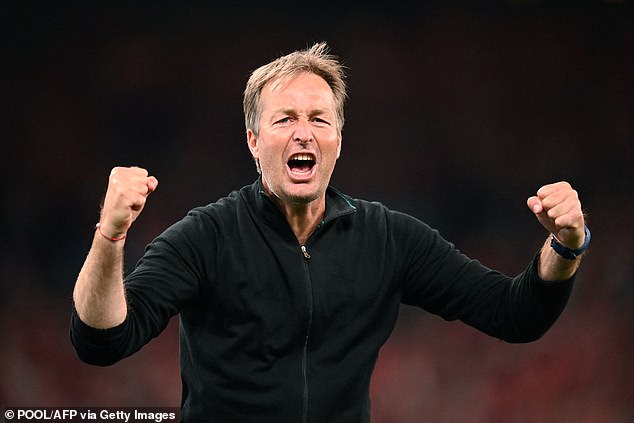 It has drawn them closer together as a team, and they huddled around a mobile phone after the final whistle waiting for confirmation from St Petersburg that Belgium had indeed beaten Finland before bursting into celebration.

Denmark finished second in Group B on goal difference despite only having three points, and they will now leave Copenhagen for the first time in this tournament to face Wales in Amsterdam on Saturday.

They simply had to win this game and hope for the best on another emotionally-charged night at Parken.

Russia were duly swept aside by goals from Mikkel Damsgaard – the young man brought in to replace Eriksen – Yussuf Poulsen, Andreas Christensen and Joakim Maehle. 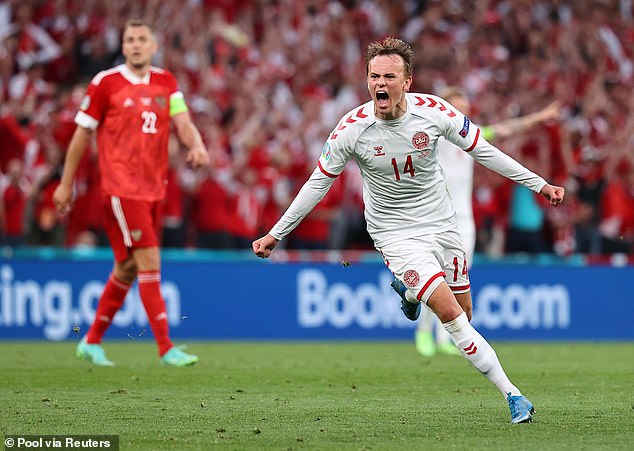 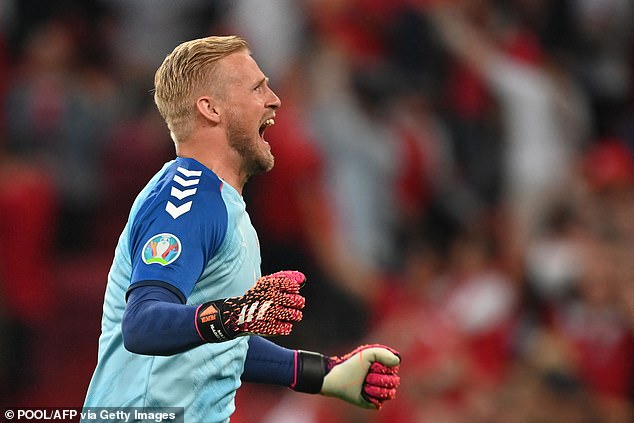 Tottenham’s Pierre-Emile Hojbjerg was immense, playing half the game with a bandaged head following a collision with Fedor Kudryashov, but there were heroes throughout this Danish team.

Russia? They needed a point and played like it. Stanislav Cherchesov’s side sat in, wasted time and briefly threatened to spoil the party with a second-half penalty, but got what they deserved in the end.

‘What a night!’ said Hjulmand. ‘If anyone deserves this, it’s our players. I can’t imagine how they managed to come back from what they went through. The team spirit and friendship among them was amazing.

‘I want to say thank you to all the people who have supported us and shown so much love. I don’t think it would have been possible without all the support. It means the world to us.’ 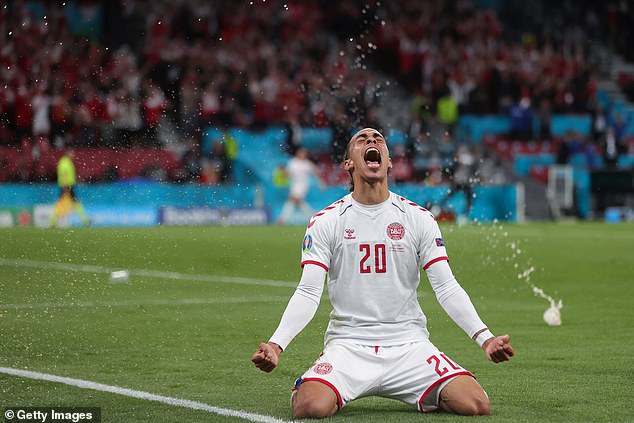 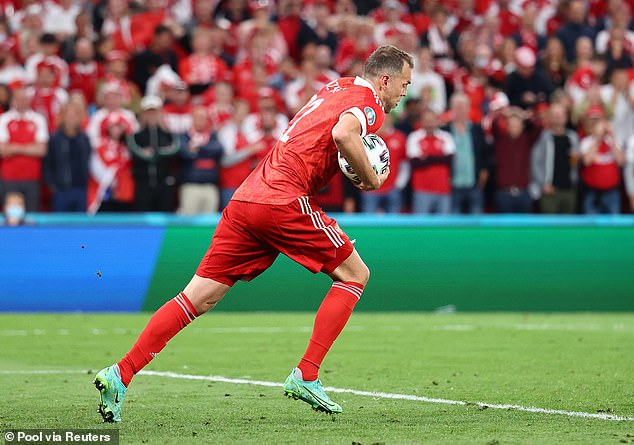 Emotional renditions of You’ll Never Walk Alone and the Danish national anthem set the stage for another memorable night – as they did against Belgium on Thursday – but no-one was expecting the Russians to roll over.

For all Denmark’s early endeavour, it was their opponents – playing in red as the home team despite being away for the first time in two major championships – who created the first chance of the game in the 18th minute.

Aleksandr Golovin cut a swathe through the Danish midfield on a run from deep, beating Kjaer and Hojbjerg before testing Kasper Schmeichel with a shot that rattled between the goalkeeper’s ankles.

Up to that point, Denmark’s only real attempt had come from Hojbjerg’s piledriver that whistled narrowly wide of Matvei Safonov’s right-hand post, but that all changed seven minutes before half-time when Damsgaard set the stadium alight with a quite wonderful goal. 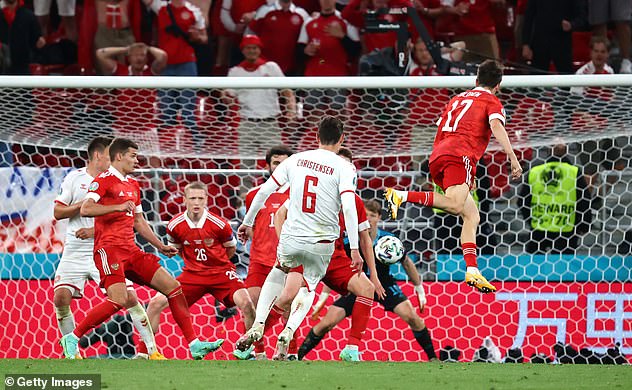 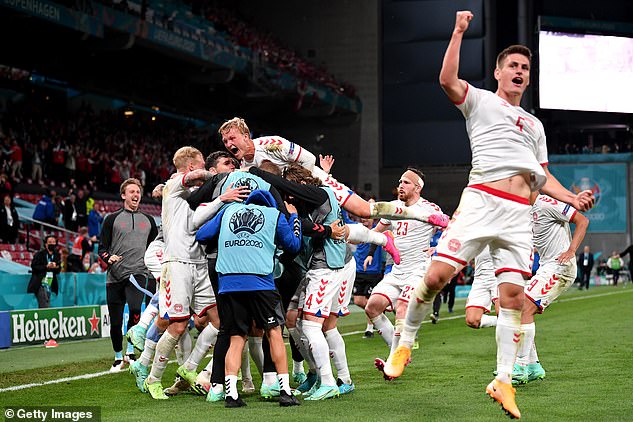 Hojbjerg played the ball into the 20-year-old Sampdoria player 25 yards from goal. Damsgaard only had one thing on his mind. He took one touch to control the ball and another to take it away from Georgi Dzhikiya. It created enough space for a shot and Damsgaard executed it perfectly, sending the ball curling and dipping into the top corner.

Parken erupted and so did Hjulmand as he charged down the touchline punching the air.

It was the perfect lift for Denmark and their fans going into the break. It also called for a different approach from Russia, although the flow of the game remained much the same before another Danish goal out of the blue in the 59th minute – one gifted to them by a quite shocking error from Roman Zobnin.

Safonov threw the ball out to Daler Kuzyaev who played it inside to Zobnin. The Spartak Moscow midfielder didn’t even look as he swung a pass back to his keeper and played it straight to Poulsen who went wide of Safonov and scored in the empty net for his second goal of the tournament. 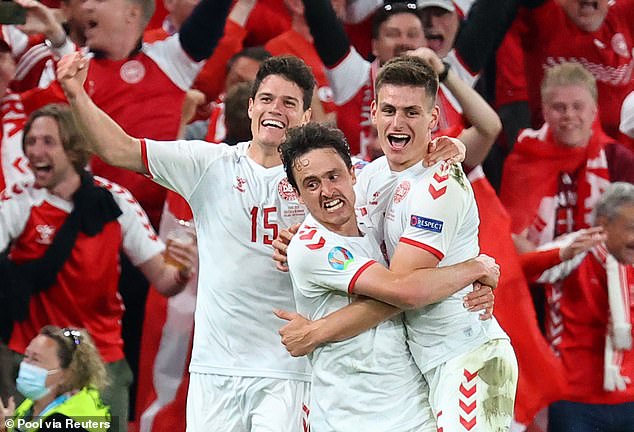 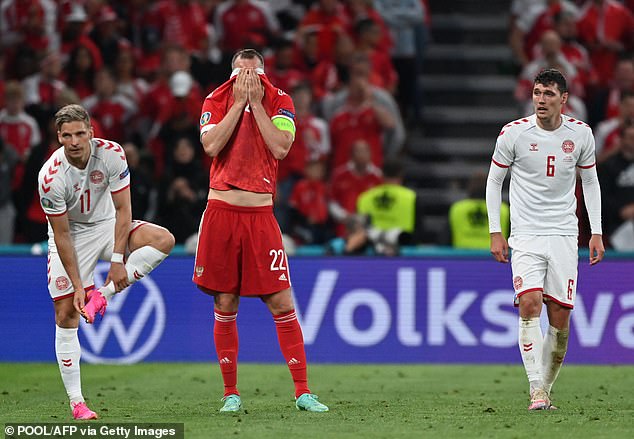 But Belgium and Finland were still all square and Artem Dzyuba silenced Parken when he pulled one back from the penalty spot after Jannik Vestergaard was penalised by French referee Clement Turpin for fouling Aleksandr Sobolev.

The mood swung again as news came through that Belgium had taken the lead, and it got even better as Christensen scored a cracking third in the 79th minute.

Safonov made a fantastic double save from Martin Braithwaite and Kjaer, but the ball ran loose for the Chelsea defender who crashed home a shot from the edge of the box.

Moments later, Hojbjerg led a breakaway and Maehle cut inside to score the fourth and spark a night of celebration.

‘We paid for their counter-attacks,’ admitted a forlorn Cherchesov. ‘In the second half we were aiming to fight back, but the second goal came out of nowhere. The game didn’t work in our favour.’