He couldn’t beat the clock and he couldn’t turn back time. For those reasons Sir Mo Farah will not be going to the Tokyo Olympics and with it one of the most successful careers in the recent history of British sport is just about done.

There might be lucrative runs on the roads, possibly even a farewell on a track somewhere, but his most meaningful races have all been run. Four Olympic gold medals, six world titles, from London to Rio, Daegu to Moscow – he had it good while it lasted.

But in the end, the truth of his 38 years was told quite brutally in this specially-arranged 10,000m trial front of 1,000 people, a bunch of cut-outs and no mainstream broadcaster at a little stadium in Manchester. 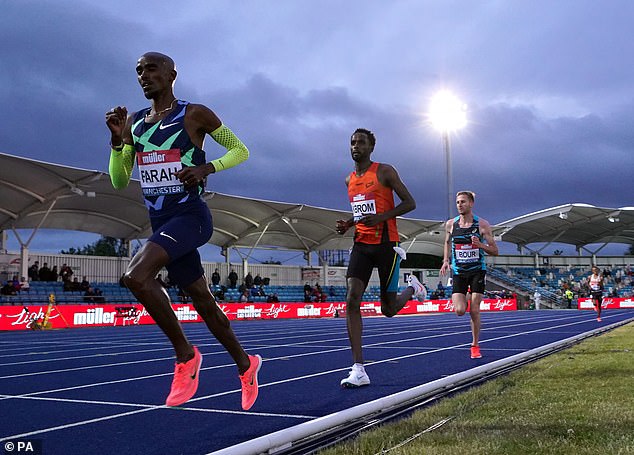 He needed to hit a qualifying time of 27minutes and 28 seconds, and back in the day that would have been a jog. At his best, 10 years ago before the era of super shoes, he covered that off in 26:46. But it wasn’t to be on a chilly night here.

He clocked 27:47.04 and it just wasn’t enough. He fell 22 seconds short in his first attempt in Birmingham on June 5 and chalked that up to a ‘niggle’ in his left ankle, but all the rumours were that he had straightened it out in his altitude sessions in Font Romeu.

Alas, it was either not recovered enough or maybe he just couldn’t stem the ageing process on the night. The margin of deficit this time was an improvement at 19 seconds, but it’s all academic.

Falling short wasn’t for a lack of expense or effort. In one regard that was because UK Athletics went to the effort of shoe-horning this invitational race into their British Championships to give their star name one final crack. 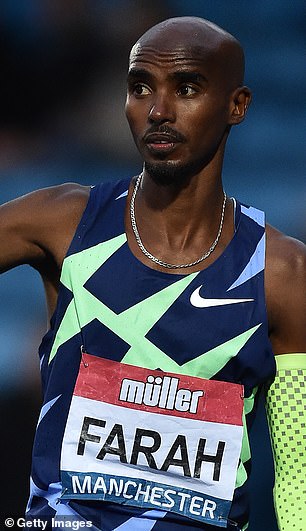 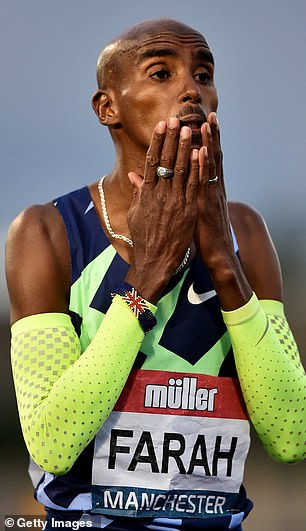 In another, it is interesting to consider the depth of Farah’s planning, which included paying for the attendance of three top-level pace-makers, including his international grade training partner Bashir Abdi, a European silver medallist.

It is understood they were instructed to set a pace of 27 minutes, but the early worry concerned the weather. It was around 12 degrees by the time of the 9.35pm start and falling quickly, which is less than ideal in a race against the clock.

After four laps he was two seconds outside where he needed to be, after eight he was even, and after 15 he was a second out, with only Abdi of his hired guns left at his side.

But then, with nine laps to go, Abdi was done and that was decisive, as it left Farah facing the huge task of pacing himself home. He was soon five seconds outside the time and by the final two laps he had a minute and 55 seconds to cover 800m. He pushed to the end, and now it could be the end.

He will leave with a legacy of immense success and also those long-standing questions over his relationship with Alberto Salazar. He was always able to deliver under that scrutiny, but ageing legs are a bigger opponent altogether. 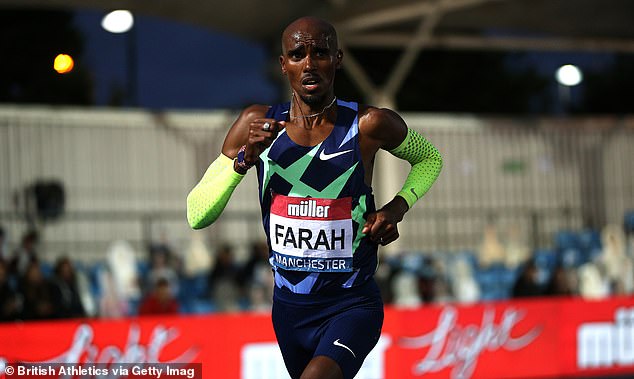 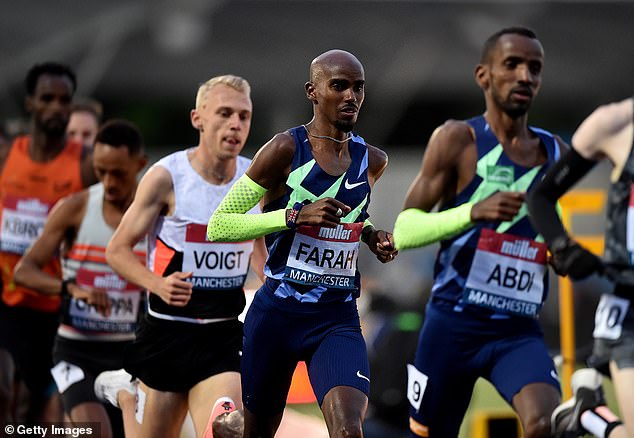 Farah started the 10,000m well but as others dropped off, so did Farah’s pace

Earlier, Dina Asher-Smith strolled through the formalities of her 100m heat. The 200m world champion won comfortably in 11.28sec – a tenth of a second quickest than the next best qualifier. The semi-finals and finals will be concluded on Saturday as she ticks the boxes necessary to get to Tokyo.

Asher-Smith said: ‘It’s really good to come here to the British Olympic trials, I want to earn the right to be in the next round which means running well. ‘I always believed it (Tokyo) was going to happen so it’s been quite easy to stay motivated. That goal never changes.’

Her appearance in Manchester came on the back of some critical comments issued by the sprinter on Twitter earlier in the week in which she lashed out at the state of the sport in this country. Her remarks centred on the lack of terrestrial TV coverage of the British Championships for the first time since their inception. 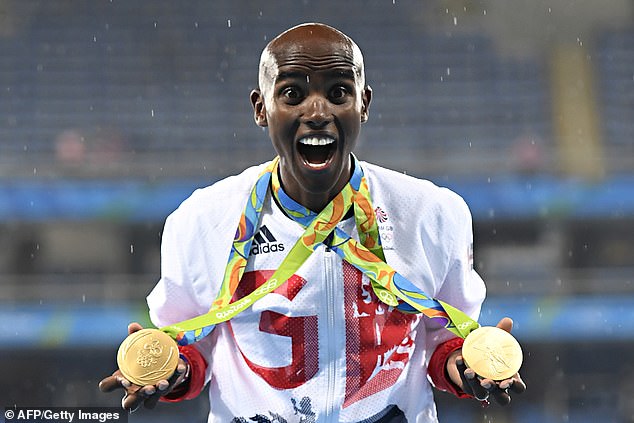 It has been held up in some quarters as a baffling failure by UK Athletics that the only way to watch the meet is via a feed on the governing body’s website, with UKA having swerved a red-button arrangement with the BBC on the grounds that the broadcaster was not willing to cover production costs.

Coates said: ‘People have said it’s not on TV but it is, it’s on a lot of smart TVs via YouTube. And we think that’s a better way to showcase the sport than it being hidden on the red button, and us having to pay for it to be on red button.

‘As CEO, I don’t want to devalue the sport, and I think giving it away for free devalues the sport.’